The Duke and Duchess of Sussex have moved to California by the end of March alongside their 1-year-old son, Archie, who has just turned into his toddler’s age on Wednesday, 6th March 2020. The sixth in the line of succession to the British throne, Harry and the former American actress, Meghan, are having a quality time with their son who just turned one. The sources have revealed that the Prince Harry and Meghan Markle are currently living in Tyler Perry’s $18 Million Mansion. Let’s dig into what they are up to in Hollywood Tycoon’s ultra-luxury hideout.

Moving to LA by the end of March, Harry and Meghan are spending quality time together with their son, and they have recently celebrated his first birthday as well. Since it was supposed to be a royal event, the couple was planning something big for their son’s birthday. But, the plans were ruined due to the ongoing pandemic that has disturbed the whole world.

However, while isolating at $18 million mansion, Prince Harry and Meghan have done something special for their son. Although they haven’t shared the arrangements and quarantine birthday plan personally, the sources have revealed that they surprised on young Archie’s birthday with a smash cake for him and had a brilliant time on Zoom chats with family and friends.

The news of Meghan and Harry isolating at Tyler Perry’s mansion is quite astonishing for the fans as Tyler had never been seen publicly with the royal couple. Tyler Perry was listed as the highest-paid person in the entertainment between 2010 and 2011, as he earned $130 million. Perry is best known for the character he created and performed in a series of hit films, Madea.

Tyler Perry’s $18 million mansion is located on the top of a hill in Beverly Ridge that has its own guarded gate. The mansion is built on the 22-acre property, and it is guarded with a personal security team. The interior and luxuries inside the mansion are unknown, but the property consists of 8 bedrooms and 12 bathrooms.

Has Tyler Sold the Mansion to the Royal Couple?

There are no records of the mansion being sold, so it is quite straightforward that it isn’t the permanent residence of Meghan and Harry. But, things are still unsure that they are staying at Tyler’s as guests, or they have rented the property for isolating together in LA. Everyone is at home during this coronavirus pandemic. Harry and Meghan must also be devoted to spend quality family time and give love to their growing son.

Earlier this year, the Duke and Duchess stepped down from their royal duties. And recently, they have revealed their plan of starting a new non-profit organization that will be named Archewell. Looks like nothing much as changed when it comes to Meghan Markle and Prince Harry’s net worth. Becoming financially independent from the royal family, Prince Harry and Meghan Markle must have ambitions and goals that they desire to achieve. We wish them the best of luck for their future. 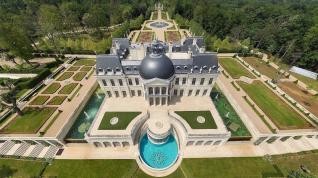 Most Expensive Home with an Underwater Meditation Room and a Nightclub

Casey Neistat Net Worth
FIND US ON