The Most Expensive Trucks/SUVs Ever

Got tons of money but don’t want to buy a whimpy Porsche or Bentley? Well, we’ve got the answer for you. Here are the most expensive luxury trucks ever made.

Most Expensive Trucks Ever: International CXT 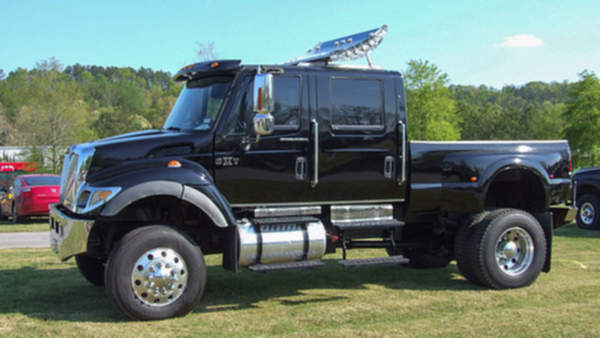 The International CXT was built from 2004 to 2008, after which it was discontinued. The truck was about $150,000 all-in, and it was built on a real commercial truck chassis.

The truck was offered in two other flavors, the RXT and the CXT. Each had top of the line leather, all of the latest electronics, including a Playstation, and could drive almost anywhere. The CXT had a towing capacity of 20 tons, so no matter how big your yacht was, it could handle it.

Some of the wealthy owners included Jay Leno and Ashton Kutcher.

Most Expensive Trucks Ever: Lamborghini LM002

The Lamborghini LM002 is now mostly a footnote in history, but at the time it was created, it cost over $130,000. In today’s money, that’s over $280,000. The truck/SUV wasn’t particularly comfortable or classy, but it was a Lamborghini, and with the Lamborghini name came the Lamborghini reputation for (un)reliability. It also was a regular on “worst vehicles ever” lists.

Some of the wealthy owners included Saddam Hussein’s son and other Middle Eastern royalty.

Most Expensive Trucks Ever: Mercedes G63 6×6

If you have a million dollars to spend, and nothing in particular to do, you can buy one of these. The G63 6×6 is a Mercedes G-wagon (which is already over $100k) with another axle and wheel. Why? Because.

The 6×6 is no longer available new, but you can buy a used one (expect to pay more than the MSRP, however). Some of the features included central tire inflation, so that the rich Middle Eastern Sheikhs could go from the roads to the dessert quickly, and there was even a Brabus version.

The truck appeared in movies like Jurassic Park, but you probably best recognize it from Dan Bilzerian’s Instagram.